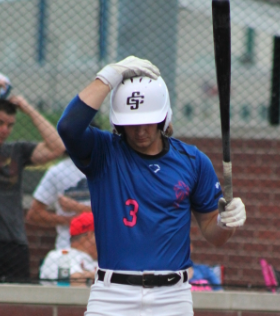 Every morning at 8:00 A.M. Austin Reed makes the trip from his host family’s house, to Pro X to get in extra work. Even on gamedays, he can be found getting in pre-pre-game batting practice.  Whether it’s a lift or a solo hitting session, he strives to excel in all aspects of the game, but that drive continues off the field, and in the classroom.

Austin is currently pursuing a degree in Aerospace engineering, a degree challenging enough without the added demands of playing college baseball.

In the Tropics dugout, he’s often met with awe when he tells his teammates he aspires to build satellites for NASA while working towards being drafted. Of course, these are two *extremely* common accomplishments…

He possesses a creative mind and coupled with his gift for math, he decided early in life to pursue a career intertwining this talent and skill. Austin took an aerospace class in high school and it opened his eyes to a path that also combined his passion for space and aeronautics. This class experience guided him toward aerospace engineering as a future career.

He began his college baseball career playing at Mississippi State University, but with health issues and other extenuating circumstances, Austin made the tough decision to transfer schools. The University of Alabama-Huntsville gave him the opportunity to continue to play and continue his education all while staying on his timeline.

With Covid being a negative force looming over players in the portal, this decision aligned with his goal of earning an engineering degree while in the pursuit of being drafted.

Austin’s dedication to baseball is unwavering, but alongside his training, he is also dedicated to finishing his degree. Regardless of the outcome of the draft process, it is important to him to finish his schooling as a degree in aerospace engineering is not only applicable to various jobs, but it is an expanding field in itself.

Austin finished the summer becoming a hero in the first round of the playoffs with a 3-run double which would be crucial in the Tropics victory. In the semi-final game, he picked up 2 hits and gunned down a runner from left field on a play at the plate. He finished the summer on a high with enough momentum to career into his college season.

His impressive summer is only one small part of the all-around athlete, student, and person that makes our Tropical rocket-scientist, #3 Austin Reed.