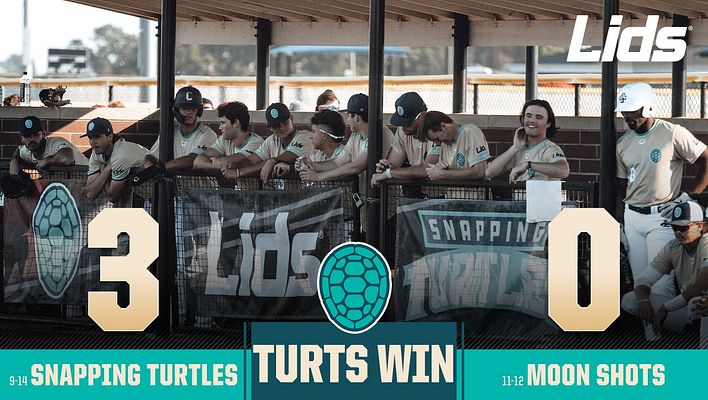 WESTFIELD, Ind. – The Lids Snapping Turtles shut-out the Community First Bank Moon Shots 3-0 behind dominant performances on the mound from Elliott Rossell (Western Kentucky) and Dane Hall (Toledo) as well as a 3-3 night for Alex Marx (Indiana State)! With the win, the Snapping Turtles have now won two of their last three and are now in a tie for seventh place with the Local Legends.

Snapping Turtles hurlers Elliott Rossell (Western Kentucky) and Dane Hall (Toledo) combined on the shut-out! Rossell earned the win throwing five innings of three-hit ball while walking two and striking out four. Hall was lights-out in relief to earn the save, tossing the final two innings and surrendering zero hits while striking out five of the seven batters he faced!

In the top of the first, Gabe Wright (Indian River) hit a double down the left-field line with an exit velo of 99 (mph) for the Snapping Turtles first hit of the ballgame. Wright was stranded at second.

Rossell’s outing began with a leadoff single on the first-pitch thrown, but the Western Kentucky commit Rossell settled in quickly. Rossell induced three ground-ball outs to post a zero in the bottom of the first.

Both pitchers took care of business in the second inning, but the Snapping Turtles bats’ came alive in the third. Alex Marx (Indiana State) led off the inning with a single, the first of three hits on the night for the Indiana State catcher. Marx’s courtesy runner, speedster Noah Wolf (Lincoln Trail), advanced to third on a Garrett Rusch (Allen County CC) single. Rusch was thrown out trying to stretch the single into a double and the next two Turtle hitters were retired, stranding Wolf 90 feet from home plate.

Rossell worked a quick 1-2-3 inning in the third, inducing a fly-out and striking out the final two batters of the inning to keep the game scoreless through three innings.

Matt Hmielewski (Briar Cliff) walked to open the fourth inning for the Turtles and immediately stole second base. The Snapping Turtles had Hmielewski in scoring position with no outs, but the next two batters were retired. Snapping Turtle namesake Tarron Lawson (Eastern Illinois) came through in the clutch, doubling with two-outs in the inning to score Hmielewski and give the Turtles a 1-0 lead.

Max Weller (Arizona Western) tripled for the Moon Shots with one out in the bottom of the fourth but Rossell didn’t waver. Rossell struck out the following batter and got a groundout to end the inning and strand the tying run.

Alex Marx got his second hit of the night with one out in the fifth inning, tripling to right-center field. Courtesy runner Noah Wolf was able to sneak home on a dropped third-strike to provide a spark and insurance run for the Snapping Turtles. On the throw to first from the catcher, Wolf immediately headed home and beat the throw back home from first base.

Rossell found himself in his second jam of the night in the fifth and once again came out unscathed. With the bases loaded and two away, Rossell induced a ground-ball for a 6-3 putout to escape the jam. After the Snapping Turtles failed to score in the top of the sixth, Dane Hall worked around a one-out HBP to post a zero in his first inning of work.

The Snapping Turtles added another insurance run in the top of the seventh as Mason Kelley (Northern Illinois) doubled and Alex Marx followed with his third hit of the night, an RBI single that scored Kelley.

With a 3-0 lead and three outs needed for a win, Dane Hall struck out the side on 12 pitches to close out the Snapping Turtles 3-0 win over the Moon Shots!