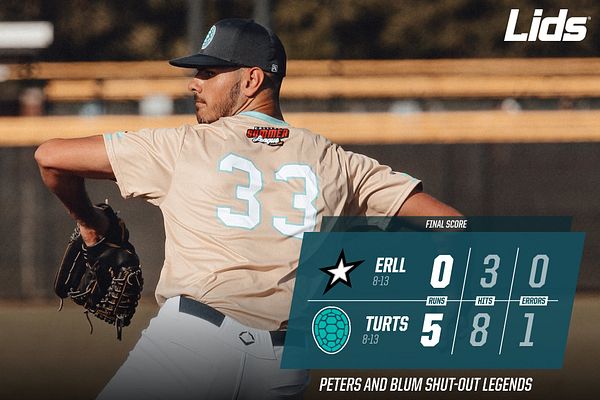 After Turtles fireballer Mat Peters (Miami OH) made quick work of the Local Legends in the top of the first, the momentum carried into the Snapping Turtle dugout. The first five Turtle hitters of the game reached, as Matt Hmielewski (Briar Cliff) walked to lead it off before Gabe Wright (Indian River) singled, and Zaid Walker (Transfer Portal) was HBP, loading the bases for cleanup man Mason Kelley (Northern Illinois). Kelley singled to score Hmielewski and give the Turtles a 1-0 lead.

The Local Legends lone-hit off of Mat Peters came in the second inning after a leadoff walk. Peters pitched out of the jam without a problem, striking out two and inducing a ground-ball for the final out of the inning.

Malik Peters walked with two-outs in the bottom of the third and Garret Gray followed with a single to advance Peters to third. Peters would score on a wild pitch to extend the Snapping Turtle lead to 5-0 after three innings.

Mat Peters retired the Local Legends in order in the top of the fourth, his final inning of work. Peters was dominant in his four innings of work Sunday evening.

Aaron Blum (Kentucky) pitched around two baserunners in his first of three innings of scoreless relief. Garret Gray threw out a runner at second to help his battery mate. The Snapping Turtles loaded the bases with one out in the bottom of the sixth but were unable to push a run across.

Blum worked around a two-out walk in the top of the seventh, getting the final batter to fly-out to right field for the final out of the game. The Snapping Turtles 5-0 win over the Local Legends snaps a six-game losing streak.

Mat Peters took the win for the Snapping Turtles, tossing four innings while allowing just one hit and one free pass while striking out five Local Legends hitters. Aaron Blum threw the final three innings out of the pen, surrendering two hits and a walk while striking out two.

Up Next: Both teams will return to the diamond looking to climb the league standings tomorrow afternoon at Grand Park for the usual Monday doubleheader. The Snapping Turtles are set to take on the Park Rangers at 4:00 PM and the MoonShots at 7:00 PM. The Local Legends play the Tropics at 4:00 PM in game one and the Bag Bandits at 7:00 PM in game two.