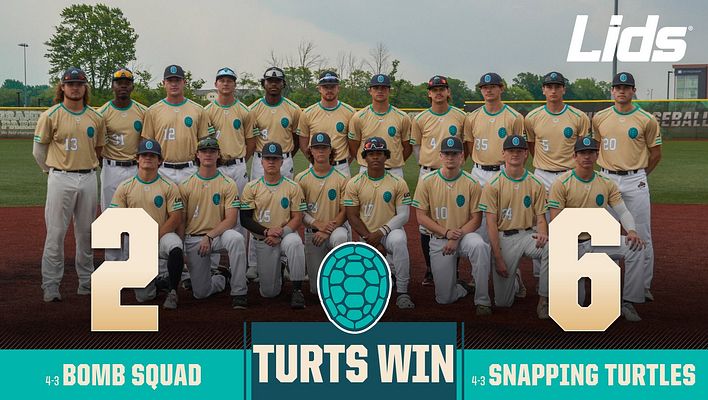 WESTFIELD, Ind. – The Lids Snapping Turtles fell behind in the first inning Thursday night but responded quickly to take a lead they would not relinquish. The Turtles find themselves in a tie for first place in the College Summer League with a record of 4-3 after a 1-3 start to the season.

The Bomb Squad took an early lead as Ramie Harrison (East Central CC) reached on error and scored on a two-out single by Nolan Bowser (St. Louis) to give the Bomb Squad a 1-0 lead after a half inning. The Snapping Turtles responded quickly however as leadoff-man Corbin Malott (Purdue) was HBP on the first pitch of the game, stole second, and advanced to third on an E2. Tarron Lawson (Eastern Illinois) walked to put runners on first and third with two-away, but a wild-pitch allowed both runners to advance 90 feet, knotting the score at one. Malik Peters (Northern Illinois) tripled in his second-straight game to score Lawson and give the Turtles the lead for good.

The Snapping Turtles tacked on three more runs in the bottom of the second to extend their lead. Garrett DeHart (Franklin College), Noah Wolf (Lincoln Trail), and Zach Fell (U Indianapolis) all reached via walk to load the bases with no outs. Malott and Gabe Wright (State College of Florida) came through with back-to-back one-out, RBI-singles to give the Turtles a 4-1 lead. With the bases loaded and two-outs, Lawson was HBP to score Fell and give the Snapping Turtles a 5-1 lead through two innings.

After six total runs in two innings of play, the two teams would go scoreless for the next five and a half innings thanks to stellar pitching from both teams’ pitching staffs. Snapping Turtles hurler Landon Lee (Purdue Northwest) settled in after the first inning as he retired the side in order in three of his final four innings pitched Thursday.

The Bomb Squad turned to Dimitri Ivetic (Danville Area CC) to shut the Snapping Turtle offense down, and that he did, striking out 11 of 12 batters faced in his four innings of scoreless relief. The Bomb Squad offense was unable to take advantage however as they were unable to score again until the ninth.

Gabe Wright led off the bottom of the eighth for the Snapping Turtles with an infield-single, showcasing his blazing-speed for the first of four times in the inning. Wright stole second, with no outs, stole third with one-away in the eighth, and with two outs Wright stole home as he caught the Bomb Squad battery lacking!

The Bomb Squad were able to push an unearned-run across in the top of the ninth while trailing 6-1, as Cameron French (SE Oklahoma State) doubled with two outs in the inning, stole third, and scored on an E5. That lone-run was all the Bomb Squad could muster in the ninth as the Snapping Turtles closed out a 6-2 win for their third-straight victory.

Up Next: Both teams will return to the diamond this Sunday evening as the CSL makes the weekly trek to Championship Park in Kokomo. The Snapping Turtles will look to win their fourth-straight as they take on the Park Rangers at 7:00 PM on CP-S1. The Bomb Squad will play the Turf Monsters at 7:00 PM on CP-S2.