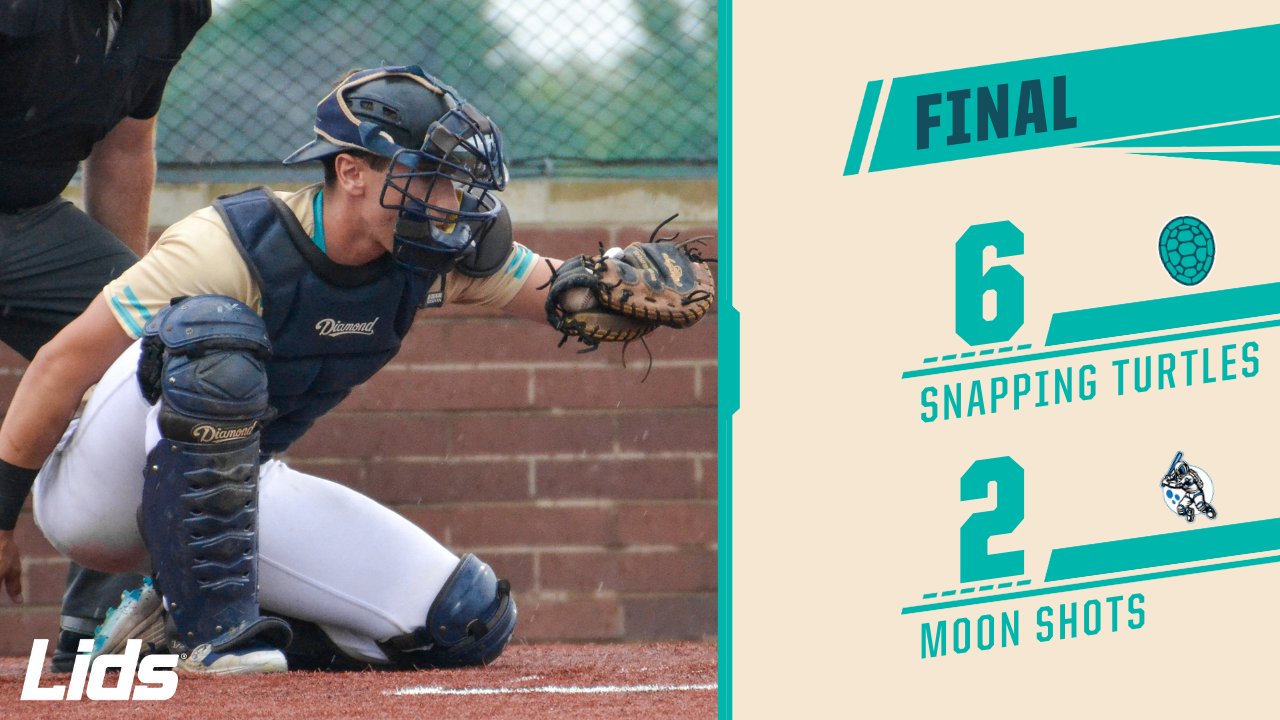 WESTFIELD, Ind. – The Lids Snapping Turtles defeated the MoonShots 6-2 Monday evening in a single nine-inning game as rain wiped out the second game of tonight’s scheduled doubleheader. The Turtles got on the board first with three runs in the top of the fourth and never looked back.

Both starting pitchers were dealing early as the game was scoreless through three innings, but the Snapping Turtles Corbin Malott (Purdue) provided a spark in the top of the fourth to help open the scoring. Malott was hit by a pitch and then stole second base before scoring on a Garret Gray (Butler) double. Alex Marx (Indiana State) singled to give the Turtles runners on the corners with one out. Noah Wolf (Lincoln Trail) entered to run for Marx and stole second, provoking an errant throw from the catcher that allowed Gray to score and Wolf to advance to third. Wolf would score shortly after on a wild pitch to give the Snapping Turtles a 3-0 lead after four and a half.

Snapping Turtles hurler Nic Besecker (Allen County CC) did not allow a hit until the fourth inning where he allowed a double and single to consecutive batters with one out. Besecker induced a 6-4-3 double-play to the following batter to pitch out of the jam. Besecker walked the leadoff man in the bottom of the fifth before getting the next two batters to groundout. However with two outs and the runner on third, Besecker was called for a balk to give the MoonShots their first run of the game.

Neither team would score again until the top of the eighth where the Snapping Turtles were able to manufacture a couple of insurance runs. Gabe Wright (State College of Florida) and Malott walked with one out before Zach Fell (U Indianapolis) was hit by pitch to load the bases. Zaid Walker (Transfer Portal) came through with a sacrifice-fly to centerfield, scoring Wright and advancing both Malott and Fell. Malott scored on a wild pitch later in the inning to give the Turtles a 5-2 lead.

The MoonShots were able to scratch a run across in the bottom of the eighth thanks to a Snapping Turtle error and Garrett Esposito (Kaskaskia CC) RBI-single. The Snapping Turtles re-established their four run lead in the top of the ninth after Malik Peters (Northern Illinois) reached via infield single and stole second before scoring on an error by the MoonShots pitcher.

The Snapping Turtles took a 6-2 lead into the bottom of the ninth where Tarron Lawson (Eastern Illinois) induced three groundouts to close out the Turtles second win of the season!