The Moonshots reach .500 after they beat the Turf Monsters in a slugfest 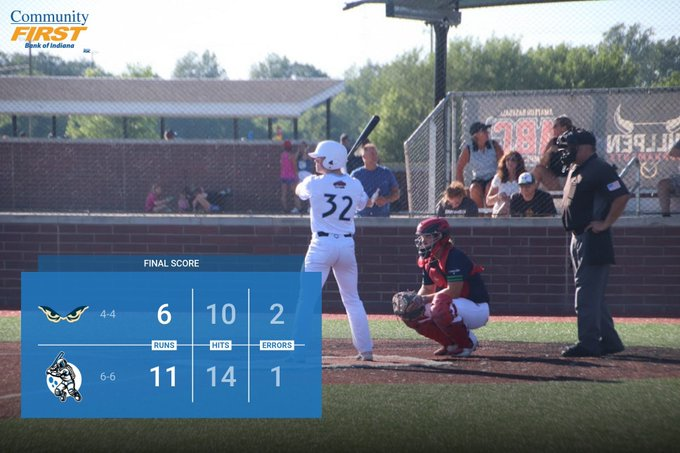 The Moonshots get their third win in a row after beating the Turf Monsters on Thursday night
with a final score being 11 to 6. The main story of the night was the offense, whenever the Turf
Monsters scored the Moonshots would fight back.

On the mound for the Moonshots was Blake Lemmon (Purdue Ft. Wayne), he had some trouble
in the 1 st when Chase Hug (Evansville) drove one run in with a sac fly and then Peter Levin
(Harvard) singles driving in another. However, the Moonshots strike back when Joesph Schmidt
(John A. Logan) triples to right to drive in two runs and then Karter Hann (Purdue Ft. Wayne)
singled to right to drive in Schmidt. The Turf Monsters pick up two more runs in the 2 nd with a
triple from Evan Kahre (U of Southern Indiana) and then a double from Landon Godsey
(Volunteer State CC) makes it 3 to 4 through two innings. Both teams were quiet in the 3 rd
inning. The Moonshots take the lead back in the bottom of the 4 th when Sebastian Parchomenko
(Portal) drove in 2 runs with a single to center. Adam Brian (Bradley) singles to drive in another
run in the 5 th making it 6 to 4.

The Turf Monster get a run back in the to of the 6 th when Levin singled to left driving in a run.
Big inning for the Moonshots in the bottom of the inning, with the bases loaded Parchomenko
hits a sac fly driving in one run, then with a ground out another run comes in. Then Spencer
Bartel (Madison) singles bringing in 2 more runs and then Brian singles again driving in one
more run making the score 11 to 5. Both teams are quiet until Owen Quinn (Ball State) homered
in the bottom of the ninth, but it isn’t enough the Moonshots win making them 6-6 on the year.
The Moonshots play again on Sunday at Championship Park at 7:00.