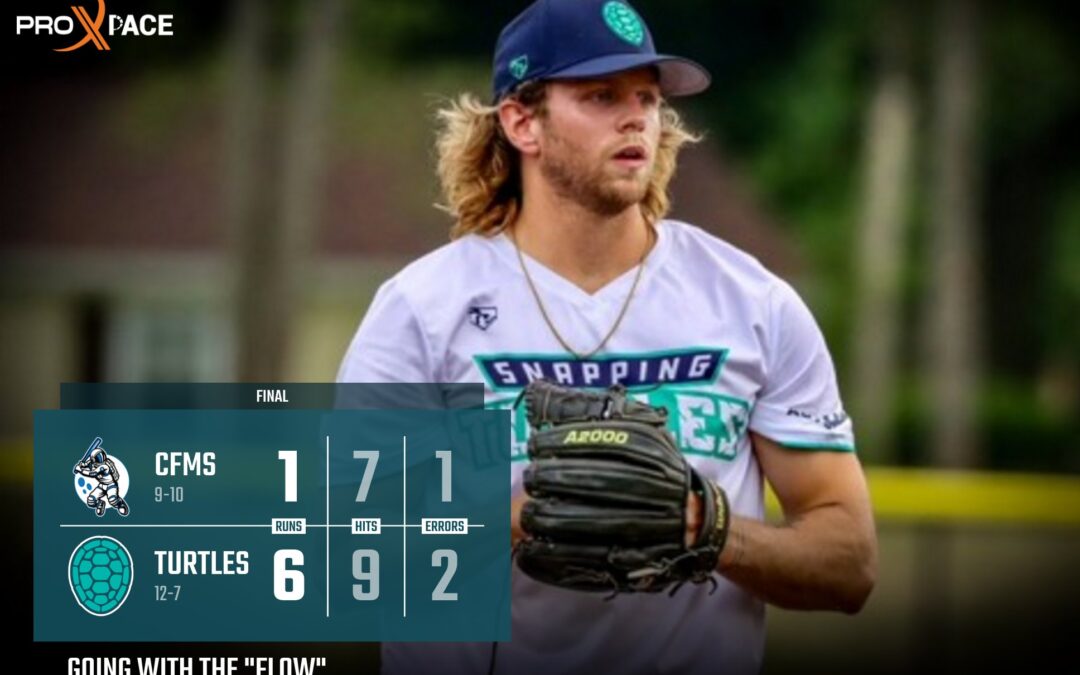 For the first time this summer, all CSL teams were not in doubleheader action on a Monday in order to provide some additional rest for players that took part in the CSL All-Star Game on Sunday. This particular Monday was also the first the Turtles had without the usual pitching suspects, Dillon Marsh and Jimmy Ramsey as they have made their leave from the team in preparation for the MLB Draft and for getting work in at Oklahoma State.

In the absence of Marsh and Ramsey and in the changed Monday format, Jesse Wainscott (Eastern Illinois) stepped in and took full advantage of the opportunity. In 6 innings of work, Wainscott absolutely baffled Moon Shots hitters with a lethal combination of pinpointed fastballs, big breaking curveballs, and ridiculously high RPM sliders. As he made his exit from the mound, Wainscott scattered 4 hits with no free passes or runs allowed …and struck out 14 (a career high at any level according to Wainscott). He did all this in under 100 pitches on the night as well, as he rarely fell behind to hitters or got into any 3 ball counts. After the game, Wainscott and his roommate/battery mate/EIU teammate/”Flow Bro”, Tarron Lawson, spoke of what was working Monday night:

“Getting ahead in counts [was key]. When you fall behind, that’s when you get into trouble. When you’re ahead, that’s when everything works better… I just trusted [Tarron]. He provided a great mix and I managed to execute.”      –Wainscott

Lawson added, “It was fun catching him today. We were just on the same page all night. The only time he would shake me off was Intentional by design in order to keep hitters guessing.”

Turtles Pitching Coach, Tim Finney, also provided Wainscott with a suggested adjustment that may have helped in Jesse’s career performance.

Wainscott said, “I was falling off the mound in my previous outings and Finney gave me a straight line method to finish down the mound better, just really working on being fluid and straight to the plate.”

Whatever Jedi pitching mind tricks Finney provides, I’d be sure to listen…

Offensively the Turtles showed out with one of their most well-balanced attacks of the season thus far. Four batters had 2 hits (Wright, Miller, Platt, Picchiotti), 9 different batters reached base, 5 different Turtles recorded an RBI, and 6 different Turtles scored a run. This would appear to be the ideal style of production moving forward as the Turtles roster begins to change in the back half of the season with player movement and departures.

Every one of the 13 Turtles that suited up on Monday night made an appearance in the game. A real team effort vs the Moon Shots!

The Turtles look to avenge last week’s drubbing at the hands of the Bag Bandits on Tuesday in CSL doubleheader action!