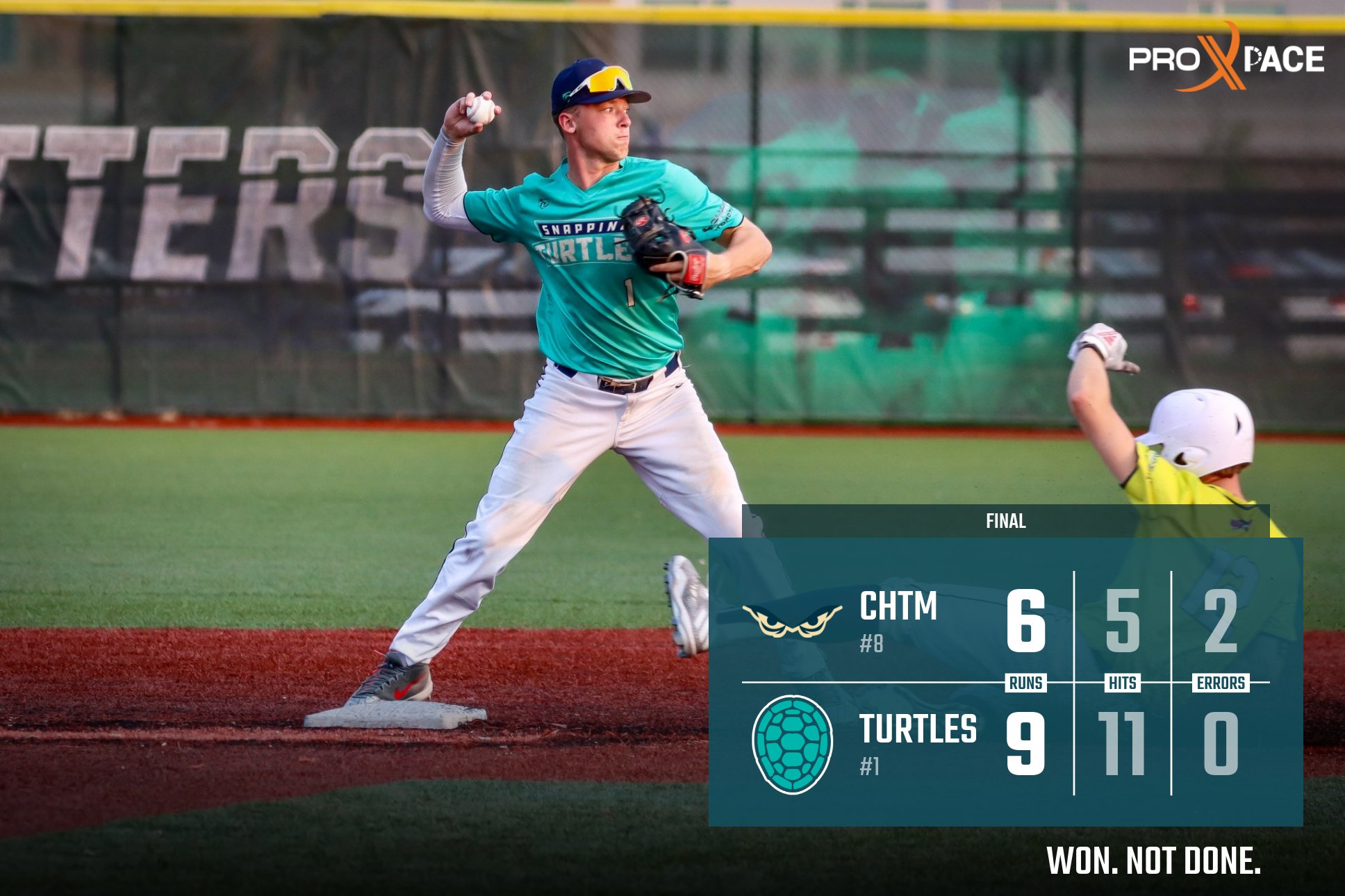 There was a buzz in the air as the Turtles made their way into Grand Park Tuesday evening. The team was excited to see one another after a week off leading up to the CSL playoffs. But maybe that very thing was the actual cause of the perceived buzz. Playoff baseball is unlike anything else in sports and the win-or-go-home fashion of the CSL format only adds to the intensity. For the entirety of the summer, our guys are here to work on their games by getting innings and at-bats as individuals helping the team in the process. But for the final week, the game and focus changes to something completely different.

Tuesday night the Turtles faced off against the Turf Monsters for the second time in as many Tuesdays. This Tuesday’s affair carried much more weight, however, as both teams seasons were on the line. Mat Peters (Hillsborough CC) matched up with Monster arm and All-CSL team member Trent Robinson on the mound.

Things started slowly for the Turtles offense in the first couple innings. Robinson was cruising for the most part until Karson Kennedy (Butler) battled up for a single to leadoff the 3rd inning. Brandon Gelpi (UIC) followed with a broken-bat single himself and then Glenn Miller (Eastern Michigan) loaded the bases with a knock. Turtles got their first run on a passed ball, Cam Swanger (SLU) laced a hit for an RBI to score Gelpi, and then Nick Sutherlin (Olney Central) drove in 2 more with a triple to left-center.

In the 4th the Turtles added another run on an RBI single from Miller that brought in Kennedy after his 2nd single of the night. And then the Turtles got busy again in the 5th with 3 more to make the score 8-0. Sutherlin and Tucker Platt (IU-Kokomo) singled to start the inning and Kyler McIntosh then sent them both home with a triple.

The Turf Monsters would get a few runs back in the 6th while ending Peters’ no-hit bad. Peters would leave the game after 5.2 solid innings of work with 7 Ks and only allowing 1 hit. Dane Hall (Toledo) and Tarron Lawson (Eastern Illinois) would handle the middle relief innings to set up a save opportunity for Cam Pferrer (SLU) in the 9th.

Leading 9-6 heading to the final frame, Pferrer hung tough after falling behind in counts to get a couple huge strikeouts. The tying run never got to the plate in the 9th and Cam secured the save and the win with the 3rd out coming on a pop-up to short.

Looking at the boxscore, it’s hard not to notice the production out of the 7-8-9 part of the order. Between McIntosh, Kennedy, and Gelpi they collected 4 hits and 4 runs with 2 RBI. Gelpi alone reached base 4 different times all in different ways: a hit, a walk, a HBP, and by reaching on error. If the backend of the lineup can produce like this to set the table for the top, then it could make for long days for opposing pitchers the rest of the way in the playoffs.

Turtles advance to play the Local Legends on Wednesday night in the CSL Semifinals. 7:30pm on Grand Park D1.