Turtles Turn in 2 Wins on Tuesday Twinbill vs Bag Bandits 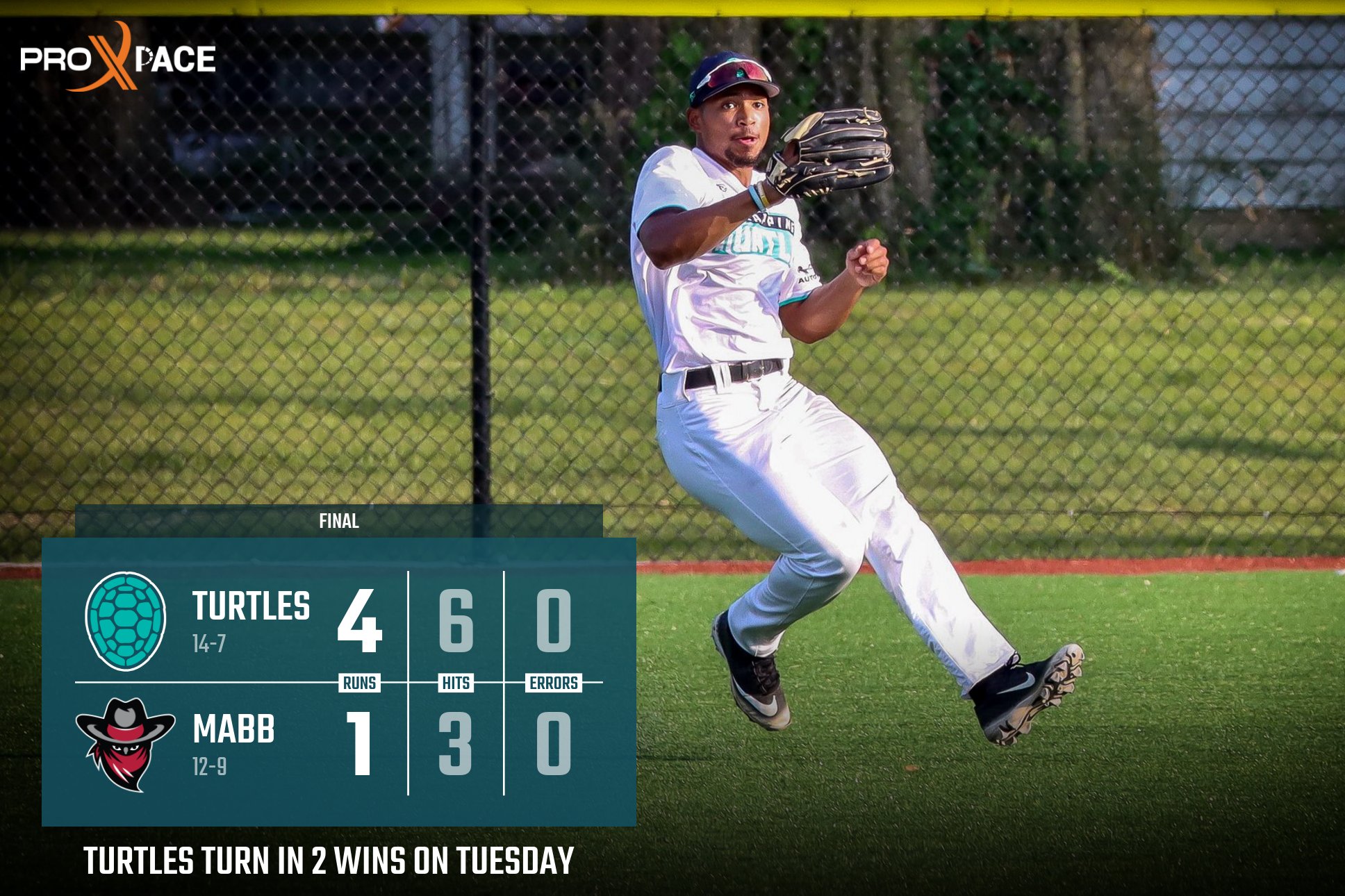 Being in the dugout the last couple weeks, it was easy to see that the Turtles had hit a point in the season where the game starts to become a grind. After a 4-0 start, the Snappers were basically playing .500 ball in the weeks leading up to the All-Star Break at 8-7 in the last 15 contests. It appears the boys took the break to heart, soul, and mind because the Turtles arms and bats have come out the second half gate with a renewed sense of energy and urgency. That was proven in their Tuesday sweep of the Bag Bandits!

Mat Peters (Hillsborough CC) was not in town for Jesse Wainscott’s pitching performance on Monday night, nor is Mat present on social media. However, he came out throwing Tuesday like he knew Jesse had shoved the night before and wanted to match his teammate’s outing. Peters threw a complete game 3-hitter against the Bag Bandits in game 1. He struck out 9, walked 3, and allowed 2 runs, both of which came via solo shots that were of minimal concern considering how well Peters did to keep runners off the base paths. This was both Peters’ longest outing and his most efficient this summer for the Turtles.

The Turtles batters compiled 8 hits in game 1 and scored runs in diverse ways. For one, Luke Picchiotti (UIC) had not one, but two Sacrifice Fly balls that scored runs for the offense. Konner Piotto (Wright State) liked that idea of Luke’s and added a 3rd SAC Fly for the Turtles to record an RBI. Cam Swanger (Transfer Portal) and Malik Peters (Northern Illinois) took bases-loaded walks to score runs and Drew Hmielewski (Transfer Portal) took an HBP to move a run across the plate, as well. So as you can see, the Turtles didn’t use a hit to score any of their 7 runs in the ballgame. They traded outs for runs, worked walks, or took one in the ribs to scratch out runs. Small ball was the weapon of choice today!

In his final appearance in the CSL this summer, Amir Wright (Ball State) had to put on a show as a parting gift to his fellow Turtles. Early on in game 2, Wright made an amazing, ranging over-the-shoulder catch on the warning track in Center Field that had fans in the stands making Willie Mays comparisons. Just as Amir took away an extra-base hit, he added his own XBH in the last at-bat of his CSL summer by belting a triple into the right-center gap. He would come around to score later in the inning. And just for good measure, the last out of the doubleheader day found its way into Wright’s glove on a shallow liner to center. Shortly after, his teammates though disappointed to be losing him in the dugout and at the top of the lineup, still celebrated his departure to the MLB Draft league with a water cooler shower along the 1st base line. Though it was only a mid-season win and it might not carry the gravity of a Super Bowl title shower or a College World Series dogpile, I’m sure the shower was just as satisfying on a hot and humid day in Westfield.

In his first pitching outing since committing to Saint Louis University last week, RHP Cam Pferrer turned in one of his best performances of the summer to this point. Cam dealt the Bag Bandits 4 innings of shutout ball while surrendering only 1 hit and 1 walk while striking out 3 and earning the Win. Newcomer RHP, Cooper Williams (Xavier), showed up to meet his new teammates earlier in the afternoon and made his first live pitching appearance of any kind in FOUR YEARS in the nightcap. A series of unfortunate events that included Tommy John surgery, shoulder surgery, and the cancellation of the 2020 baseball season due to COVID-19 kept Cooper off the field for that extended period of time. In his first action he threw 1+ innings in which he spun high RPM slider after high RPM slider that left Bandit batters in his wake. He struck out the side in the 5th before giving way to back-end reliever Wynn Takacs (Carl Sandburg) who would earn the 2 inning save to secure the Snapper sweep.

The Turtles do battle with the Turf Monsters on Friday night at 8:30pm on Grand Park D1.